One would think. But one would be wrong. 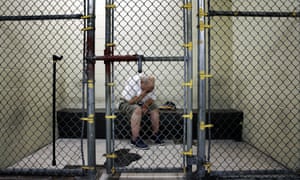 For years now, [Kristopher] Rodriguez has been stuck in this sad limbo: according to the state, he is well enough to stay incarcerated, but far too sick to live in the general prison population or even to get regular visits from his mother.

Lawyers who have examined his case say his story is typical. Florida’s prisons have been the subject of repeated investigations for their treatment of prisoners with mental illness; so have jails and prisons in other states, including California, Illinois and Alabama.

The March 31, 2018 Guardian UK article about endangered mentally ill Florida inmate Kristopher Rodriguez (above) is NOT the Guardian’s first article about him.

One would think that this international attention would serve to protect Kris. And one would be wrong.

Can you help out a very worried mom?

A sample letter to Warden Walker at Santa Rosa Correctional Institution is attached for your use.

You might remember that Kris is a formerly high-achieving youth who experienced the onset of schizophrenia in his teens, decompensated and committed a crime that has left him in jail over the past nine-and-a-half years.

During that time, his treatment has been such that he has lost over 40 pounds, been often out of touch with reality—at one point not even recognizing his mother, Gemma Pena—sometimes engaged in serious self-harm, and never made any progress toward being able to care for himself after his release, now scheduled for December.

Earlier this year, his medications were drastically reduced following a visit during which Gemma complained because he’d been led to the visit in ankle shackles without socks on, leaving him bleeding. Not long after, he was accused of assaulting a guard and transferred to Santa Rosa.

Right now, Gemma knows basically nothing of his condition, but has been told that the prison seeks to have Kris sign a form denying her medical information, despite her being his legal guardian.

Please take a moment to write to Warden Walker at Santa Rosa C.I. since no one is answering the phone or email.

Thanks very much for your commitment to human rights.

The first of two documents that were attached to Ms. McClellan’s SPAN Facebook post plea for assistance, Gemma Penna’s letter of May 10 to Florida Department of Corrections Secretary Julie Jones:

Dear director my name is Gemma Pena, I am the mother of inmate Kristopher Rodriguez DC# C07499.

This is to advise you that I am not only the mother but the person that has full legal rights by the Power of Attorney of his medical and mental records, I have repeatly requested medical records since April 13, 2018, at no avail as of this date of this letter none records of been sent to me nor have I been billed for these copies, no free copies have been offered, I have discussed this on the phone conversations I have had.

Upon further investigation and up to date everyone is refusing to tell me if he is alive or dead or if he is in a hospital or if he is in ICU dying. I have pleaded with these peoples to find out how my son is and have been denied. GOD PLEASE LET ME SPEAK TO MY SON PLEASE WHOEVER GETS THIS LETTER TRY TO TALK TO MY SON SINCE I CANNOT TALK TO HIM, I FEAR FOR MY SON I KNOW WHEN A GUARD IS HURT WHAT HAPPENS TO THE INMATE.

I want to know why this doctor changed the medication into what it was and they are refusing this information to me even with my medical power of attorney.

Also once they decided to change this medication why was my son not placed in observation to see how he would react. Please any one that can help me. A desperate mother’s plea for the life of her son.

Thank you for your time.

I am concerned for the wellbeing of Kristopher Rodriguez (C07499) who is an inmate at Santa Rose C.I. Kristopher was diagnosed with schizophrenia as a teenager and has experienced several psychotic breaks while serving his sentence in the state prison system.

Earlier this year while he was at Lake C.I., prescribed psychiatric medications that had been helping him were discontinued and his mental health deteriorated. His mother, Gemma Pena, is now seeking information about the medical condition of her son. She is not being given any information and has not been allowed to visit him, although she is Kristopher’s legal guardian because of his severe mental illness.

I am writing to ask you to please allow his mother to visit him and to ensure that he receives appropriate physical and mental health care.

My printer only works in months with both a Blue Moon and a Friday the 13th, so I’ll simply be sharing this blog post in the most insistent ways I can think of. Kris is due to be released in December, please join in as best you can and help make sure that neither he nor his mother are put through continual hell until then. Thank you.

2 Responses to One would think. But one would be wrong.