Who lives, who dies, who tells your story – #MonteAdams 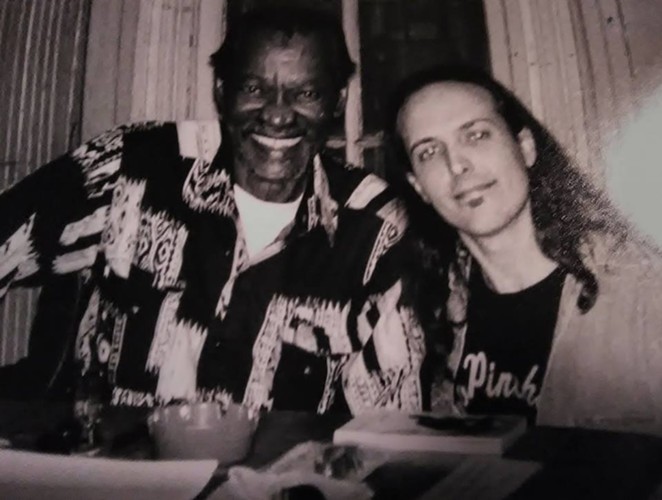 Adams was found in his home Monday, according to a Facebook post by horn player George Brisco, who added that he didn’t know the cause. As of press time, the Current was unable to confirm Adams’ death with the San Antonio Coroner’s Office.

Google Alerts provide me with news about framed innocents and their anything-but-innocent framers, but often aren’t on target – the San Antonio, TX 51-year-old photographer Monte Adams (above) who died too young isn’t the Brevard County, FL 55-year-old maliciously convicted Monte Adams (below) I’m tracking who is in increasing danger of dying too young … Florida prisons are notoriously deadly, and bound to be even more so soon, with the new budget cuts.

The Monte Adams I’m tracking has been in prison for murder since 1983 – 35 years.

Monte was not in possession of stolen property from the crime scene; his friend Johnny Galvin was. Monte did not exhibit any unusual spending after the crime; Johnny Galvin did. The chief witness against Monte was – in typical Brevard County fashion – Johnny Galvin, who may well have been a match to the the fingerprints that were never “run” after they inconveniently failed to implicate Monte.

Monte has been denied parole because Florida claims his mother had once stated that she was afraid of him. That’s not the truth. No one in public employ will help Threna Adams get this supposed misunderstanding cleared up, which means it isn’t really a misunderstanding … it’s just another reprehensible ploy, like refusing to run inconvenient crime scene fingerprints.

Monte is at Cross Correctional Institution. I pulled up the summary of the most recent suicide there. It was so ridiculously redacted that it was impossible to tell how David Shaw accomplished his exit. He was 44.

I’ve been writing about framed individuals on this WordPress blog since 2010. It’s my second blog; I wrote about Monte on the first one, too. I’ve lost touch with Threna and Farley Adams after meeting with them a few times years ago. They’re law-abiding, God-fearing, church going citizens who’ve worked hard their whole lives and deserved to have their tax dollars pay for a FAIR trial for their son. The “public servants” who’ve denied them this reasonable and just fruit of their labors ought just drop dead and go straight to hell, so real public servants can run the prints and set Monte free.

Crime scene fingerprints did NOT match Brevard County, FL’s lesser known Monte Adams, so they were never run, being so very inconvenient to securing his 1983 conviction.

2 Responses to Who lives, who dies, who tells your story – #MonteAdams