@KathyFndzRundle censoring #CagedCrusader, scores more re #DeadInmates (including me) – updated

Update 6/8/17: Harold Hempstead’s sister Tweeted and re-blogged this post [https://helpmybrotherharoldhempstead.wordpress.com/2017/06/07/kathyfndzrundle-censoring-cagedcrusader-scores-more-re-deadinmates-including-me/]. I think it’s fair to assume that her doing so is responsible for my no longer being blocked on Twitter by Miami-Dade State Attorney Katherine Fernandez Rundle (@KathyFndzRundle). Perhaps there’s something Harold’s sister can Tweet and re-blog to Florida Today (@Florida_Today) to achieve the same results. It might help with busting a good number of frame-ups, as well as ensure the safety of one of the framed, who’s currently incarcerated in (gads!!!) Dade County.

Miami-Dade State Attorney Katherine Fernandez Rundle plays by her own rules, rather than by the rule of law. Her recent “Close Out Memo” on the 2012 scalding homicide of mentally ill Dade Correctional Institution inmate Darren Rainey was inaccurate – it described fellow scalding shower victim Daniel Geiger as being alive, although he died under suspicious circumstances at Lake Correctional Institution last November. The Memo also engaged in character assassination, specifically, that of whistleblower/inmate Harold Hempstead, who persistently brought Darren Rainey’s homicide to the attention of the Miami Herald.

To facilitate this character assassination, Rundle withheld the audio police interview of whistleblower Hempstead, unlike other interviews.

Hempstead maintains that “there’s no logical reason why the audio interview I had with the police wasn’t turned over to the media with all the other audio interviews but for foul play with the MDPD and Dade County Florida State Attorney.”

I’ll go further … there was also no logical reason why Governor Rick Scott hadn’t already fired Rundle, before she had the chance to muck up more of the Rainey investigation: this is hardly the only time Rundle has protected public servants ahead of the public in her lengthy “service” to Miami-Dade.

Had Governor Scott moved swiftly to hold public servants accountable after Darren Rainey was killed, it’s very likely that Dade corrections officers wouldn’t have hounded Richard Mair into committing suicide the following year, in the very same unit where Darren was killed. Subsequent deaths can be attributed to Scott’s inaction. Note that Scott doesn’t have a hands-off policy concerning the activities of our state attorneys. Quite the contrary. He’s engaged in viciously attacking Orange-Osceola State Attorney Aramis Ayala for declining to call for the death penalty in her circuit, which is not only in keeping with growing public sentiment, but in keeping with the boundaries of Ayala’s discretion.

Rundle – on the other hand – has no discretionary authority to keep killers on the public payroll.

Private citizen Dennis Antiporek suffered a death similar to Darren Rainey’s in a sauna in January of 2015. News articles used the exact same words to describe the condition of both men’s bodies: burnt, and missing chunks of skin. The Miami-Dade Medical Examiner’s Officer performed both autopsies (sans years of delay and confusion in Antiporek’s case).

Photos  can be compared, so can the conclusions that were drawn.

Why didn’t the mainstream media say as much in 2015? Why won’t they say so now? What’s in it for the media to let Rick Scott – via ongoing self-fettering – stay on his wildly expensive and witless Ayala death penalty witch hunt while public safety is clearly jeopardized by Rundle in Miami-Dade, and while the death toll of Florida inmates continues to rise?

I pdf’d Rundle blocking me on Twitter (below). She wasn’t the first to do so. A Central Florida journalist was the first, I believe, followed by a newspaper from an adjacent county. It’s unfortunately all quite connected. A former cop from Rundle’s circuit – Marshall Frank – has endorsed an “investigation” of Gary Bennett’s wrongful conviction by the newspaper that blocked me, a trite podcast that is little more than a collection of comments from persons who have nothing helpful to say, in the manner of which the reporter who blocked me had previously weighed in on, eliminating his county’s – within Aramis Ayala’s circuit – connection to the travesty.

What would be most helpful to say is that dog handler John Preston was discredited by Julius Manning in the summer of 1982. Manning was the actual perpetrator of a series of post office crimes, one of which Dale Sutton was exonerated of, and released in January of 1983. In the knowledge of this, Brevard prosecutors put Preston on the stand in January of 1984 against Gary Bennett to perjure himself yet again, as he’d done scores (perhaps hundreds) of times before. The Central Florida reporter who blocked me did not want to hear about the wrongful execution that enveloped his turf.

People with gigantic egos who can’t handle the truth shouldn’t pick politics, law or journalism as a career. Doing so leads to ruining and ending innocent lives, and making justice unavailable. You know who you are. Read What Color is Your Parachute and find a new line of work, already. 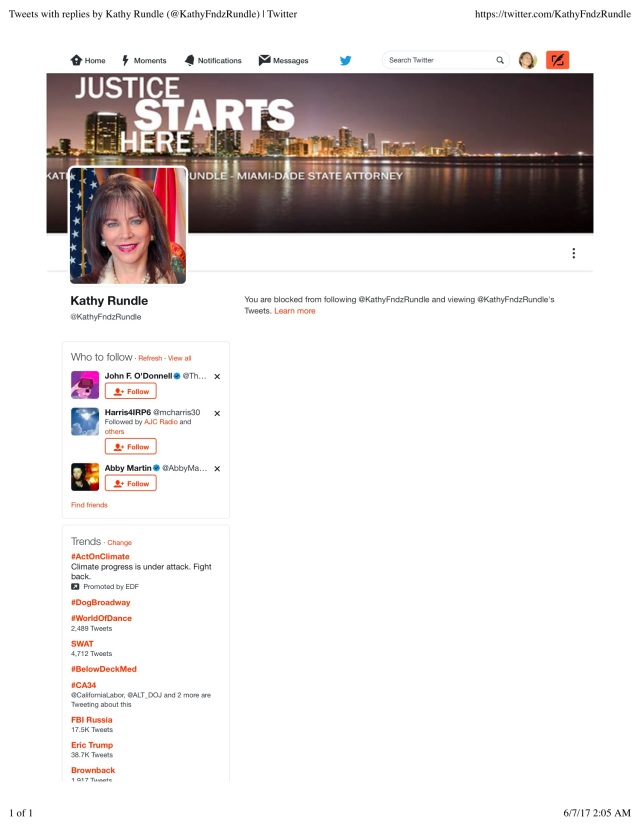 2 Responses to @KathyFndzRundle censoring #CagedCrusader, scores more re #DeadInmates (including me) – updated