What is the most toxic … barium, arsenic or Bob Graham? (updated)

Liesa Hill became suspicious when she spotted her husband slipping something into her morning coffee in March, according to court documents. She had been ill since 2011, and despite trying several doctors and even undergoing surgery, she had found no diagnosis. Since she stopped drinking her morning coffee, her health has improved, she told the New York Daily News. Police said her previous symptoms were consistent with heavy-metal poisoning.

Liesa Hill’s story unfolded in Tennessee, not Florida, so perhaps there will be a reasonable outcome.

Maybe the investigators will actually consult toxicologists, instead of pretending that internet searches make them instant experts. Maybe they’ll even look at her medical records. Maybe they won’t make a huge deal of it if a toxicology lab misspells her (perhaps former) last name.

Maybe the department she’s dealing with hasn’t have been the subject of recent internal, state and federal investigations, and won’t be allowed to investigate themselves if they merely pretend to investigate her case. Maybe the department she’s dealing with won’t ask for documents proving not only motive but proclivity, and then throw them out. Maybe she won’t find that investigators hid a related arrest from her. Maybe if investigators do things that are that low down and dirty, local prosecutors won’t pretend they can’t do anything about it.

Maybe the state’s law enforcement representative in her area isn’t on board with the corruption between police and prosecutors, and will help her rather than later succeed in spinning the dirt he has on local public servants into a new career and another (perhaps a third) state pension as the local sheriff, with the support of local retired feds. Maybe if everything goes haywire up to and including the state law enforcement level, her governor won’t be so busy pretending to defend the likes of Terri Sciavo that he can’t possibly be of any legitimate assistance to her.

She clearly has one thing in her favor … her governor isn’t the president’s brother, and can’t influence feds to pretend they’ve never heard of her if she has to take it that level.

And maybe she won’t be forced to consider herself lucky in comparison to dozens of strangers and feel compelled to help them get out from under their phony expert frame-ups. Maybe she’ll be able to focus on recovering, instead of looking over her shoulder, waiting for the next attempt on her life by the same man.

Maybe the court clerk won’t destroy records in her case, after pretending to notify her of that intent, even though having no lawful right to even consider records destruction. Maybe there won’t be an undated “exhibit” on file she’s not seen before, that’s contradicted by oral records of a hearing. Maybe, 14 years later, she won’t be back to square one in defending her life.

Maybe Tennessee isn’t in to victimizing victims, and letting people get away not only with attempted murder, but actual murder, like Florida is.

That newspaper was formerly owned by the Graham family, who retain financial ties to it … Graham family as in former Florida legislator/Governor/U.S. Senator Bob Graham, who, as governor, pretended to investigate John Preston years after the phony had been federally discredited in Dale Sutton’s case. Graham spent ten years on the Senate Intelligence Oversight Committee, and was specifically responsible for holding the FBI to their mandate to make sure that public corruption doesn’t affect trial outcomes. Graham didn’t take that responsibility seriously, just as he didn’t take investigating John Preston seriously. As a result, two men were executed – Gerald Stano and Linroy Bottoson, and others aside from Gary Bennett remain framed.

Dale Sutton never got justice after being framed by John Preston’s perjuries … the courts extended the prosecutors’ absolute immunity to Preston. As huge as this outrageous overreach was, to this day, corrupt local, state and federal public servants pretend they’re unaware of it. These rotten apples don’t limit their corruption to frame-ups and the ensuing coverups; their corruption permeates every activity they’re involved in … on the job, and off. Corruption is now so pervasive that the corrupt consider themselves the “in crowd.” Please share this post to help ensure that Tennessee takes care to distance itself from this crowd, and doesn’t do to Leisa Hill what Florida did to me. Thank you.

[This lab test was conducted months after I’d fled my home; I was already feeling exponentially better. It means that my arsenic level was likely in the red rather than the yellow zone when I ran.] 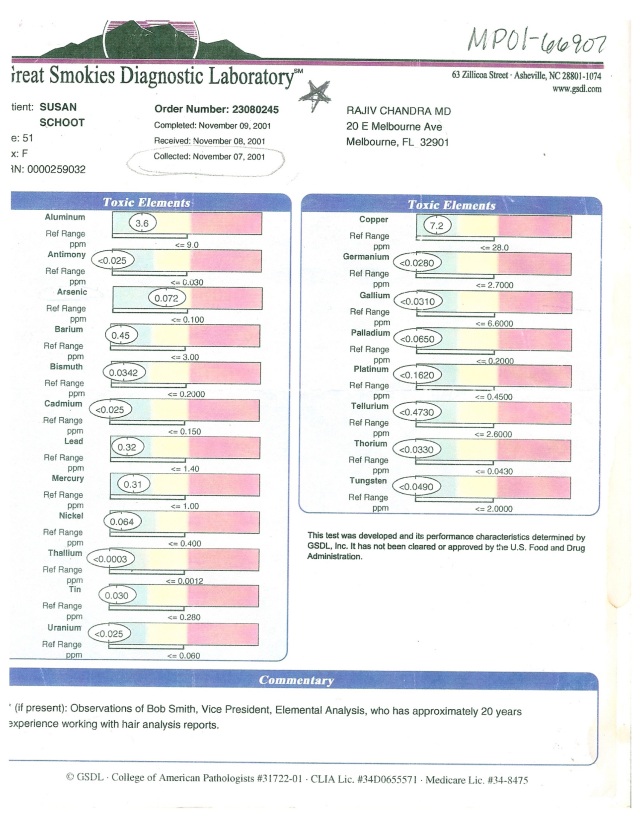 4 Responses to What is the most toxic … barium, arsenic or Bob Graham? (updated)