I’ve had occasion to look at broadcast licenses to determine station ownership and find out who’s pumping out propaganda in the name of news coverage, i.e.; although known for newspaper ownership, Gannett also owns television stations (ABC, NBC, and CBS affiliates).

In those couple of instances of checking broadcast licenses, I noticed that they had expired last year, so every now and again, I check another station.

I haven’t found one station that has a current license.

Renewing broadcast licenses likely isn’t free. So the question is this: Is our FCC corruptly opting out of collecting revenues, or is our FCC now so incompetent that new licenses aren’t posted as acquired?

Broadcast license renewal is likely less expensive than it should be, and certainly no attention is being paid to whether any station’s broadcast signal actually reaches the entire viewing area that the license encompasses, even though today’s technology makes that situation inexcusable … intentional salt in the wounds of those who cannot afford cable or satellite television.

The FCC is still trusted to make really big decisions, like the pending Comcast/Time Warner merger.

And it shouldn’t be.

Like most of our federal regulatory agencies (and most of our legislators that provide Oversight for each), the FCC has been “captured” by corporatists, made painfully obvious by Tom Wheeler’s appointment. The FCC knows it doesn’t have to give a damn whether it’s site shows broadcast license after broadcast license as having expired in 2013.

Oversight has become Overlook. Universally. Anyone that still believes we have representation for our taxation is watching too much TV, TV is that is perhaps unlicensed, and held in hostility to the tenets of a free and unfettered press. 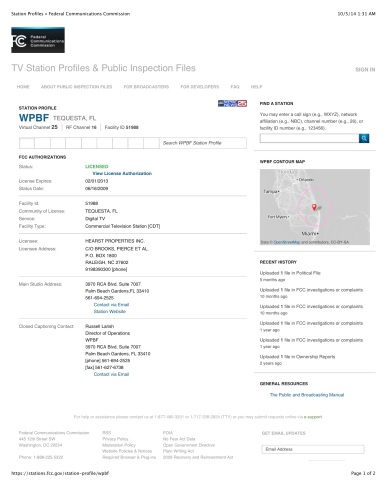